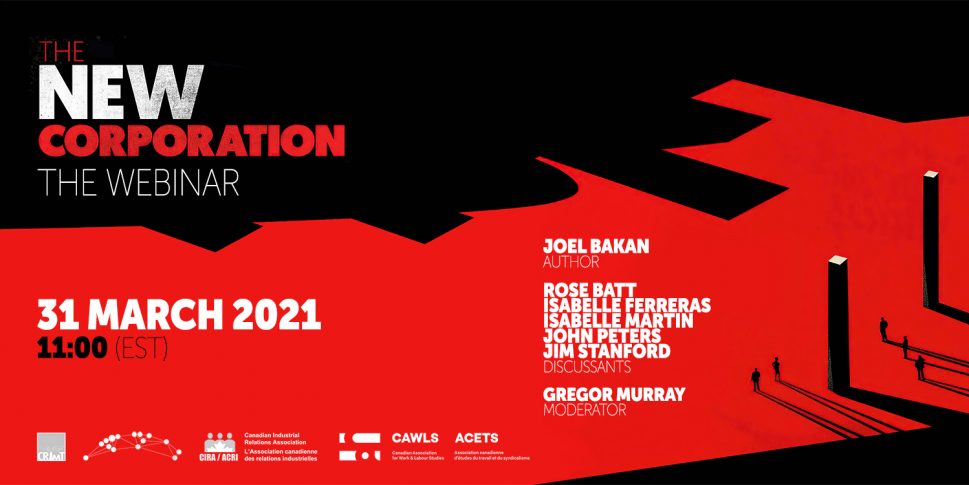 Who could be better suited to address major societal issues than efficiently run corporations? There is just one small problem: corporations are still, ultimately, answerable to their shareholders. The New Corporation

With CEO compensation soaring, income inequality at all-time highs, the planet facing ecological disaster, and democracy in a precarious situation, Joel Bakan and Jennifer Abbott have again teamed up to make the movie The New Corporation: The Unfortunately Necessary Sequel. And, in printed form, from the author of The Corporation: The Pathological Pursuit of Profit and Power (2004) comes The New Corporation: How “Good” Corporations are Bad for Democracy (2020).

This cry for social justice, deeper democracy and transformative solutions merits close attention from researchers and actors in the world of work. This is why we are convening a conversation in the form of a webinar on The New Corporation, which will take place on Wednesday, March 31st, 11 AM (EST). It is an opportunity to bring together the book author and movie co-creator, Joel Bakan, with a stellar cast of specialists in a dialogue about corporations, work and democracy.

This Conversation on The New Corporation is an initiative of the CRIMT Partnership on Institutional Experimentation for Better Work in collaboration with the Canadian Association for Work & Labour studies (CAWLS) and the Canadian Industrial Relations Association (CIRA).

Registration is free but required. To do so, please click on the button below and fill out the short form. A Teams link will be sent to you a few days before the event.

Although it is not essential to see the documentary or read the book beforehand, we do encourage you to do so.

If you have a subscription, the New Corporation documentary can be viewed on Crave TV/HBO Canada. You can also access the documentary on hotdocs@home until March 11th for 9,99$ Canadian. There will be screenings at festivals across the world: ACMI Documentary Film Festival in Australia on Thursday, march 11th at 6:30 pm and KDOCS Film Festival in British Columbia on Friday March 12th to Sunday March 21st.

For more information on how to view the documentary on one of the aforementioned platforms or on how set up a community screening of your own, click here. For the book, The New Corporation, click here.

Biographical details on the author

Joel Bakan. Joel is an author, filmmaker and a professor of law at the University of British Columbia. His work examines the social, economic, and political dimensions of law, and he has published in leading legal and social science journals as well as in the popular press. Bakan has won numerous awards for his scholarship and teaching, worked on landmark legal cases and government policy, and served frequently as a media commentator.


Biographical details on the participants

Rosemary Batt. Rose is the Alice Hanson Cook Professor of Women and Work at the ILR School, Cornell University. She is a Professor in International and Comparative Labor and Human Resource Studies. Her research focuses on comparative international studies of management and employment relations, with particular attention to the impact of financialization and globalization on companies, workers, and collective action among low service wage workers. She is co-author of Private Equity at Work (2014); co-editor of the Oxford Handbook on Work and Organization and co-author of The New American Workplace: Transforming Work Systems in the United States. She is also a researcher in the CRIMT Partnership on Institutional Experimentation for Better Work.

Isabelle Ferreras. Isabelle is one of the coauthors of The Working Manifesto: Democratize, Decommodify, Remediate. She is a tenured senior fellow of the Belgian National Science Foundation. She is a professor of sociology at the Université catholique de Louvain where she teaches in the Department of Social and Political Sciences, at the Institut des sciences du travail and at the Economics School of Louvain. Since 2004, she has been an associate of the Labor and Worklife Program at Harvard Law School. In the spring 2017, Ferreras was elected a member of the Royal Academy of Sciences, Humanities and the Arts of Belgium, Class Technology and Society. Isabelle is also a researcher and coordinator in the CRIMT Partnership on Institutional Experimentation for Better Work.

Isabelle Martin. Isabelle is an associate professor at the School of Industrial Relations, Université de Montréal. Isabelle does research in labour law, law, economics and human rights, and socially responsible corporate governance. She recently published ‘The Use of Transnational Labour Law in Steering Socially Responsible Corporate Governance Toward Increased Workers Protection’. She is also a researcher in the CRIMT Partnership on Institutional Experimentation for Better Work.

Gregor Murray. Gregor holds the Canada Research Chair on Globalization and Work at the School of Industrial Relations at the Université de Montréal. He is Director of the Interuniversity Research Centre on Globalization and Work (CRIMT) and of the CRIMT Partnership on Institutional Experimentation for Better Work. He is also a researcher in the Industry 4.0, Work and Employment Axis of OBVIA. Gregor’s research focus is on making work better.

John Peters. John is an associate professor of Labour Studies at Laurentian University. His research focuses on economic globalization, inequality, and labour market deregulation. His teaching interests cover: comparative employment relations; labour and global climate change; as well as union organizing and advocacy. He is a founding editor of the ‘Labour in Canada’ series, and is also active in the Sudbury community, formerly serving as Vice-President of the Sudbury and District Labour Council. He is also a researcher in the CRIMT Partnership on Institutional Experimentation for Better Work.

Jim Stanford. Jim is Economist and Director of the Centre for Future Work. He divides his time between Sydney, Australia and Vancouver, Canada. Jim is one of Canada’s best-known economic commentators. He served for over 20 years as Economist and Director of Policy with Unifor, Canada’s largest private-sector trade union. To read Stanford’s study Ten Ways to Improve Work After COVID-19 Pandemic, click here.